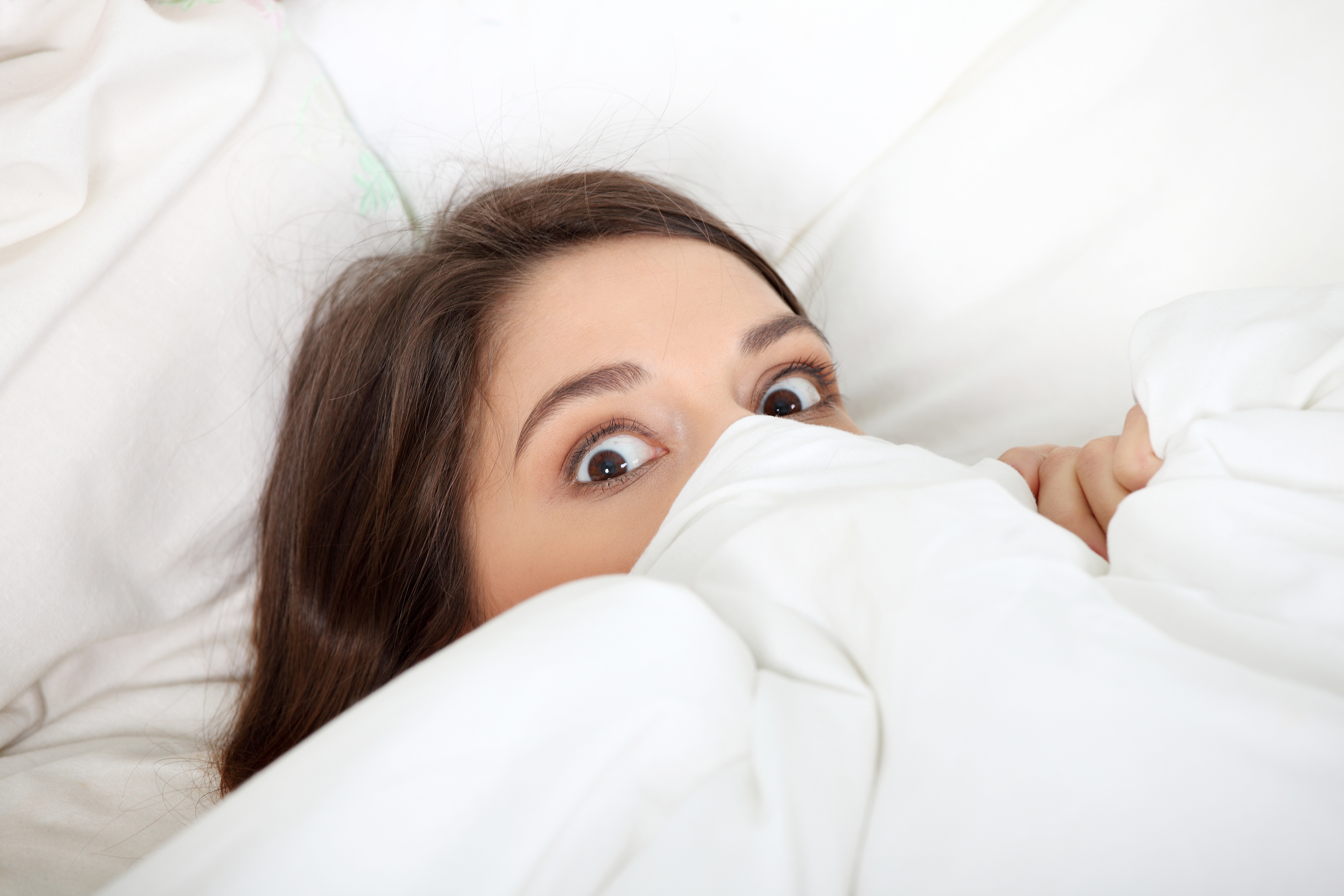 I’m a fraidy cat. Like seriously. I can spook myself faster than anything. It’s not uncommon for me to stumble upon a mirror and jump before realizing it’s ME. Pete comes around a corner in the house, and I scream! He has said a million times, “Babe, I live here!” Me: “I know, but I wasn’t expecting you to be right there.” Sometimes, he’ll lightly tap on the door before coming in our bathroom, just to let me know he’s about to unexpectedly {for me} enter.  The bathroom is most often the scene of said occurrences. I’ve spooked the girls, too, by getting spooked. A chain reaction thing. It’s happened at work, as well. I don’t even remember who it was the other day that scared me half to death, and my screaming caused them to scream. And then everybody came running to see who’d been shot. I seriously don’t know why I startle so easily, but I do. Add to this a very over-active imagination, and you have all out neurosis (or would it be psychosis?) sometimes.

Years ago when I was pregnant with Abbey, I was home by myself for a couple of days. Pete was on a business trip. I was in country radio at the time, so my alarm was routinely set for 4:15 AM (yes, the middle of the night for most). Haley was in kindergarten, so on the rare occasion when Pete was out of town, I would take her over to a friend’s house at bedtime, so she could sleep there and go to school with them the next day. Now don’t get me wrong, I love being at home by myself. I just don’t necessarily like sleeping at home by myself at night. I’ll turn the front porch lights, coach lights, and back patio lights all on. My rational is that if anyone decides they want to break in, surely they wouldn’t come to the house with all of the lights on. But then I’ll second-guess myself and think, they might think, “nobody’s home at this house because they left all the lights on and it’s 2 am in the morning.” I know, crazy, right?! Welcome to my brain. But, back to the story….

I was getting ready for bed most likely around my usual time of 8:30/9:00 pm. Although not totally relaxed, I was comfy in bed and hoping I would/could fall asleep fast.

All of a sudden, I heard this noise that went “click, click.” I froze. Adrenaline pumping. “What was that?” I thought. I waited. And waited. And waited…. Silence. Nothing. After several minutes, I calmed down, convincing myself it was just my imagination.

My heart was racing. What in the world?! My mind began to run through all of the scenarios. Was someone trying to break into the house? Was someone under my bed? Were they in the kitchen? The sound didn’t last long enough for me to figure out exactly which direction it was coming from. But it was for sure a “click, click” sound and then silence.

And thus began the cycle.

For the next THREE (yes THREE!) hours!

I’d hear “click, click” – freeze – and then wait for their next move. During the silent moments, I was trying to figure out why they were messing with me. Were they jiggling the lock on the door? Were they enjoying tormenting me? Who would sing at my funeral? Who would take care of my girls? Who would take them prom dress shopping? Who would teach them how to put on makeup? It did enter my mind to get up and go call somebody, (this was before cell phones, dear friends), but I thought if they were in the kitchen, they may not realize I was in the bedroom, and perhaps I’d be spared.

It was so systematic. I was dealing with a real whack job! (Ummm, hello! Whack Job #1, meet Whack Job #2). I’m sure I prayed some in there too. And cussed. But mostly prayed. For daylight! Finally, time won out, it was midnight, and I couldn’t take it any longer. If the big bad wolf was out there, I needed to get this over with.

Un-bravely, I got out of bed, and ran to the kitchen. I grabbed the phone (hanging on the wall) and dialed my neighbors, Bill & Cristi. Cristi sleepily answered, and I think I shout whispered something like this: “Cristi, somebody is out back on my patio! They’ve been jiggling the lock for the last 3 or 4 hours. They’re messing with me. They’re trying to break in. Send Bill over.”  On the other end, I hear her tell Bill to “get up now! Go over to Carmen’s.  Somebody’s trying to break in!”

This is where the details get fuzzy. I’m sure it was the mixture of sheer terror and lack of sleep. Bill came over to my house, and courageously walked right up on the “would-be” bad guy!!! Armed with a bat, he entered the screened-in area, as I stood frozen in the kitchen. The next thing I know he’s yelling through the sliding glass doors: “no one is back here, Carmen.” I walked over, flipped on the lights, and opened the sliding glass doors. I was so thankful to be alive! And to have a human that I knew be starring back at me! As I began vomiting all that had happened the last several hours, trying to figure out the psychology of this madman, it happened AGAIN!!

I whirled around, and there was the Tormentor! Laying right there on my counter. You see, I had gone for a walk earlier in the evening. I loved walking with my Sony Cassette Walkman. It was one of my most favorite things. It was the yellow Sport edition. And it had AUTO-REVERSE! Yep, you guessed it. My walkman had been laying on the counter, auto-reversing for the last 3 hours! I walked over, picked it up and my tunes were still playing through my headphones. I showed Bill the culprit, and I can’t remember if he laughed or rolled his eyes at me. He should’ve used the bat on me! The auto-reversing explained the systematic “click, click” and then silence every 30 minutes or so. It was playing one side of the cassette, reversing and then playing the other side. 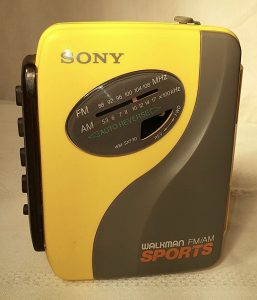 Although the mystery was explained, I don’t remember sleeping very much that night. I do remember Pete coming home the next day, and me dog-tired, saying in a monotone voice: “Hey babe, glad you’re home. I didn’t sleep last night. My walkman auto-reversed the whole night. I thought someone was breaking in. I’ll tell you about it tomorrow. Nite.”

I guess you could say I suffer from FCPE. Fraidy Cat Psychotic Episodes. I’d love to tell you this was the only time. But, there’s so much more where this came from. I’ll let y’all pick which story you want to hear next. The “Deer” – or – the “Toilet Bowl Brush.” Yep.

Does anybody else suffer from this same affliction?! There’s comfort in sharing. So share with me!

btw, I was cleaning out a drawer and came across my beloved Sony Walkman. I don’t think I’ll ever toss it just because of this story right here. 🙂 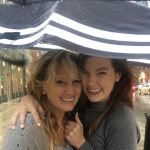 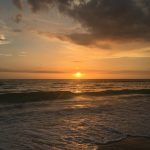 No such thing as bad weather.

I TOTALLY get this! If Karl ever leaves town, I don’t sleep. Period. I lived alone for years before I got married, and for the most part I got used to it (except for the three week sleep-free period when I just HAD to finish reading “It” by Stephen King. I do not recommend this, by the way…)

It actually aggravates me that I get scared now when I have to sleep in our house alone, since I was so independent before I got married! But I’m glad to know I’m not the only Fraidy Cat!

Oh my goodness! I’m the exact same way! I absolutely hate being home by myself all. night. Even having Greg in the house is a comfort. Could you imagine Greg taking care of a bad guy? Bwahahaha! When I’m home by myself, I like you, hear every noise and imagine every scenario. I do not sleep at all and then I’m exhausted the next day. Scares the death out of me. We’re suppose to trust, but I just can’t in that situation. I try to talk myself through that all the time.

Yes, Carmen…. I can related! I used to be much worse. When I was 8 or 9 I was watching my baby brother in his playpen, my mom was in the neighborhood raising money for the Ladies Auxiliary. I thought I heard something and took off out of the house in search for mom, leaving baby brother to fend for himself. I used to be petrified of lightning, also. When we lived in Germany in the 70s, I was alone in a 4 bedroom apt. I would open the door, run to check in every room, under every bed, look in every closet and then run back to lock the door hoping no one had come in during that time! I am happy to report that I am housesitting this week, with all kinds of dead animals on the wall and I have been just fine :-). Love you Carmen!

You are toooo funny.. As I was reading I could hear your laugh! Can’t wait for the next one.

Oh I definitely can relate. I leave a light on in the living room every night, have a nightlight in the kitchen, bathrooms, and hallway…and some nights I keep the nightstand light on. I spook easily lso and have scared my three year old grandson several times when he has stayed with me. When I had a dog, she barked at every single noise she heard which spooked me even more. No you are definitely not the only one to do this! I’ve done it at work too…o don’t know why I spook so easily, but when I am in the house by myself I hear things that I don’t hear during the daytime. Amazing how daylight takes away all our fears….but not the spooking!

Bill and Cristi, I forgot they once lived so close to you! Great memories! This is one of the many, many reasons I have my dog. She’s the friendliest, cuddliest, mushiness creature alive during the day but do NOT mess with me once I go to bed., or if everyone else is away from home. She instinctively guards me as if her life depends on it (when she’s not snoring at the bottom of my bed, or under my desk, that is). If I didn’t have Dora, I’m sure I would be in the same boat. I think once we women become adults and create families of our own, whatever form that takes, we so invest in them that we go into overdrive with our imaginations and. our “what ifs”. It’s no longer just me against the world (of things that go bump in the night), it’s about the Daughter, the Wife, the Mom of those we hold so dear. It’s just how we’re made, I guess 😊